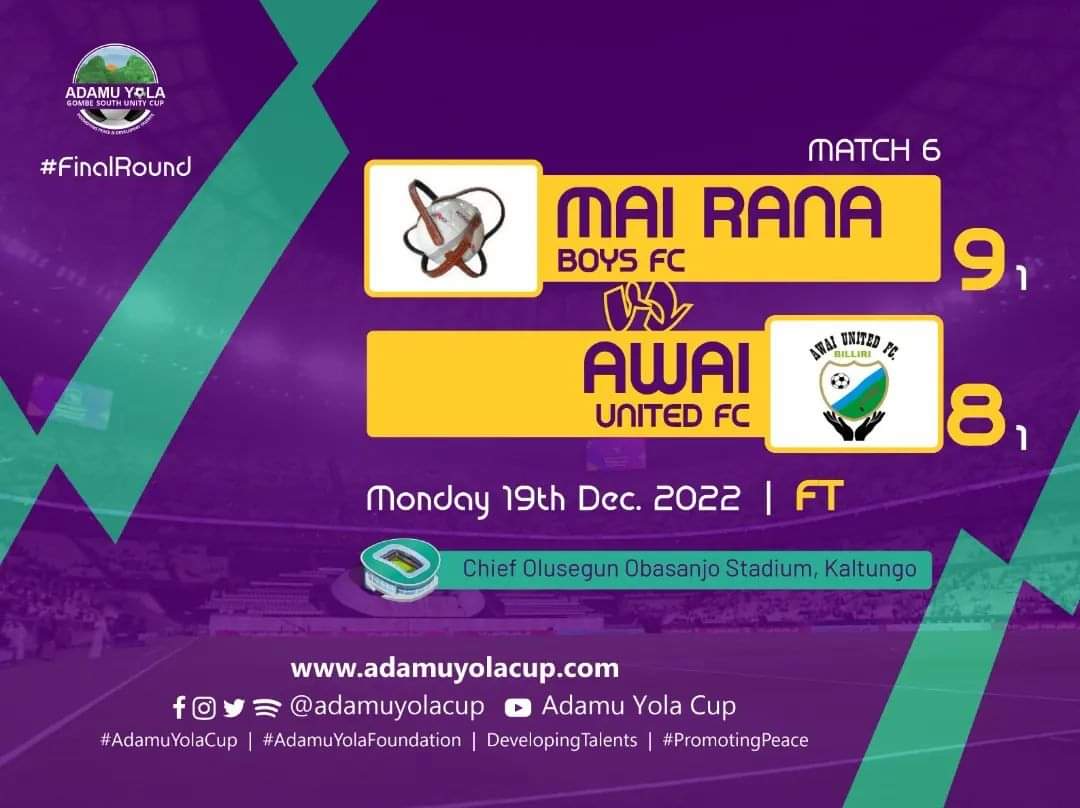 Action continued on Monday in the round of 16 of the ongoing 7th edition of the Adamu Yola South Unity Cup at the Chief Olusegun Obasanjo Stadium, with Komta United and Mai Rana Boys having their place in the last eight secured.

The first game of the day saw last year’s quarter finalist Gwandum Academy eliminated from the championship after losing to Komta United 4-2 on Penalties after it ended 1-1 in regulation time.

Gwandum started the game on the front foot and were rewarded with an early goal courtesy of Ibrahim Kabir two minutes opener.

Komta United then took over the baton controlled the game and looked a more better and composed of the two teams but struggled to convert their chances.

They (Komta United) however rally round, kept the pressure on their opponent and finally their equalizer would arrive in the 32nd minutes thanks to Jeremiah Jordan delightful strike to beat the goalkeeper who no answer 1-1 it was at the break.

The score line remained the same in the second half with nothing to separate the two sides at the end as it went straight into penalties with Komta emerging victorious 4-2 on penalties as they go through to the next round.

Like Komta United, Mai Rana Boys also needed to come from behind to force the game into penalties where they edged Awai United 9-8 to reach the Quarter Final of the Adamu Yola Unity Cup.

Musa Umaru had fired Awai United into the lead in the 39th minute of the game before Mai Rana fought back and got their equalizer on the 77th minute mark thanks to a goal from substitute Ibrana Power.

The game then went into Penalties after it ended 1-1 with goalkeeper Dauda Rabo proving to be the hero for his side after he made two saves to see his side through.

Mai Rana Boys will now face off with Komta United in the Quarter Final as they battle for a place in the last four.

Matches continue on Tuesday at the Chief Olusegun Obasanjo Stadium, Bare City FC will trade tackle Ayaba United FC in the first game by 1pm, while FC Greater Tomorrow will then look to navigate their way against Highlander FC Ture in the second match scheduled to kickoff by 3pm.