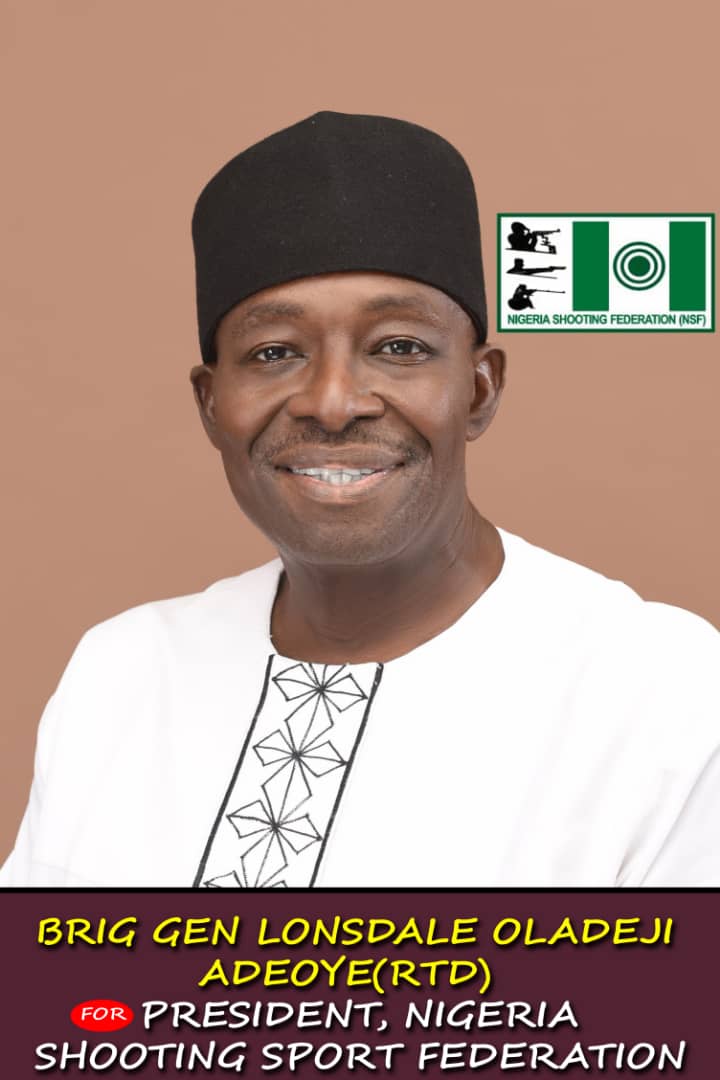 After Decades Of Obscurity, Shooting Sports Held Aloft in Nigeria, thanks to Brigadier Gen Lonsdale Adeoye

The enviable strides of Brigadier Gen Lonsdale Adeoye in the resuscitation of shooting sport in Nigeria after 3 decades of obscurity is worth commendable, below are the provisional reasons for questions “Why” and “How” could the General be making such indelible headlines👇👇

He also ensured the inauguration and co-option of para-officials into the main body of the NSSF, in consonance with International Shooting Sport Federation’s Statues, with the creation of the position of 2nd Vice President.

One of the sites visited was the Shooting Range at Ukporota, Port-Harcourt, Rivers State, which was later handed over officially to the NSSF for use.

During that championship, the NSSF President signed pacts and collaborations between the NSSF and its foreign counterparts.

In one of the pacts signed, the Italian Short Gun Federation and Italian Pistol and Rifle Federation, would collaborate and partner with the NSSF to upgrade, to international standard, shooting sport in Nigeria.

At Algeria, the NSSF President was able to sign collaborations with four countries, namely, Sudan, Morocco, Liberia and Angola, to help develop shooting
sport in those countries.

Also, the NSSF participated at the 2019 National Youth Games in Ilorin, Kwara State, for the first time ever, with ten states featuring athletes.

At the international scene, two officials from the NSF were sponsored by the ISSF to attend Developmental System Course in October, 2017 in Montenegro. They were Brigadier General Adeoye and Athletes’ representative, Abdul Madu.

Another two went for the same course this year under sponsorship of the ISSF.

Interestingly, too, the European Shooting Confederation sponsored the NSSF President to a Grade C Coaching Course in Montenegro in 2018.

In financial assistance, the ISSF has spent about 9,000 Euros on the NSSF since the inception of this Board after seeing the potentials that abound in it and wishes to do more.

The endorsement was signed by the duo of the NSSF President and Board member, Major General Hammakim.

The project is projected to last for only two weeks before completion.

Currently, the NSSF is in talks with Norway and Turkey through its consultant in the U.K. for similar purposes.

These are some of the revenue earning ventures for mass production to West African countries, and later Africa. The Company rebranding the NSSF ‘SPORTS WIZZ’ is based in India.

The NSSF collaborates with them through Assembly consultant, a Nigerian based in the U.K., Kola Olagbaiye Esq.

Those facilities worth millions of naira, are already in the custody of the NSSF.

The achievements of the recently dissolved Board of the Nigeria Shooting Sport Federation under Brigadier General Adeoye in four years cannot be overemphasized, even though lots of other programmes are lined up for 2021.

But special thanks and much ado must go to the Honourable Minister of Youth and Sports Development, his Permanent Secretary, Directors, and staff, the Chief of Defence Staff, Chief of Army Staff, the Inspector General of Police, NSSF partners and sponsors, the Media(particularly SWAN) and few others who have always given their unalloyed supports to the NSSF .

Despite meagre resources available to it, the immediate-past board of the NSSF achieved so much than ever thought possible, four years since its inauguration, which means it would achieve more and make Nigeria the home of shooting sport in Africa, and a formidable force in world’s shooting sport, given another chance pilot the affairs of the Federation.

Together, we can do more, especially in a sport that has up to 36 medals in it.