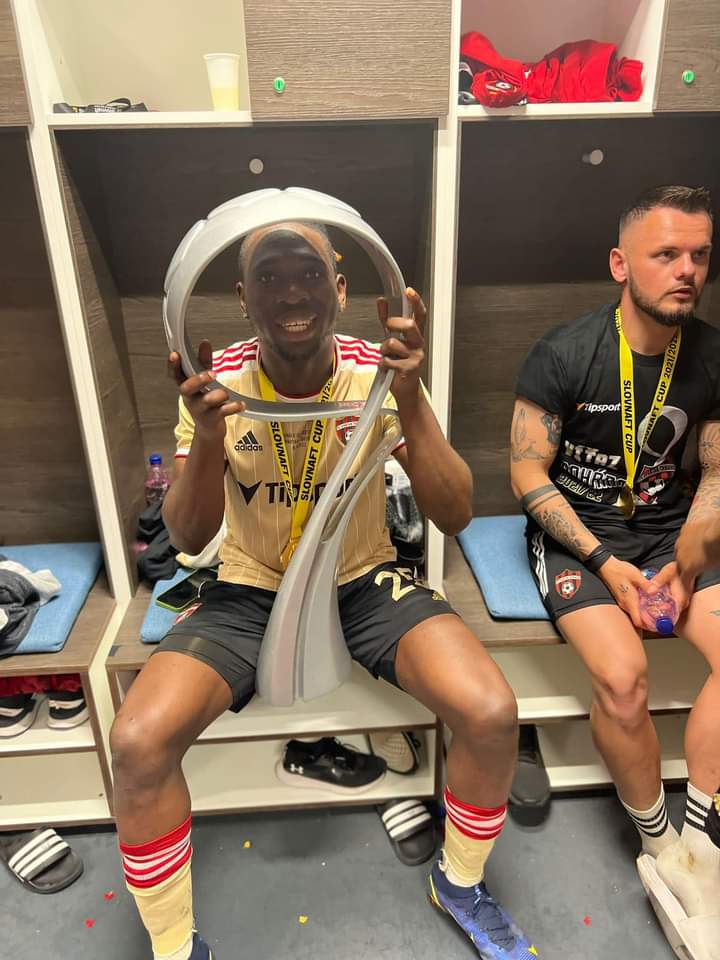 Posted By: Grace Johnon: May 10, 2022In: WorldNo Comments
Print Email

All joy for Nigeria Forward Bamidele Yusuf after he helped his club FC Spartak Trnava to the 2021/2022 Slovak Cup triumph following their extra time 2-1 victory over Slovan Bratislava at the National Stadium in Bratislava on Sunday night.

Bamidele Yusuf a product of Obazz FC who joined the Slovakian side in November 2019 has now won his first professional silver wear with the club.

It was feisty encounter which ended goalless in the first half but it was Slovan who took the lead five minutes in to the second half thanks to Alena Mustafič strike, but Spartak gave an immediate reply Courtesy of an own goal from Vernon de Marco’s, The result was decided in the 114th minute following a goal from substitute Dyjan Azevedo who turned out to be the hero of the night as the match ended 2-1 in favour of FC Spartak Trnava to be Crown the Slovak League Cup champions for the third time in their history.

Bamidele Yusuf who was full of excitement described the feat as a huge moment for him and his career as believes it the beginning of a new dawn in his career.

“It’s a big night and a big moment for me and my career it a dream come true, I am short of words I can’t tell how I feel at the moment, I am really excited and i hope it keeps coming these good for us as a team”, he said.

As a result of the win FC Spartak Trnava have qualified for next seasons UEFA Europa league, they are however currently second on the Slovakian super liga with 45 points six points behind leaders Slovan Bratislava.