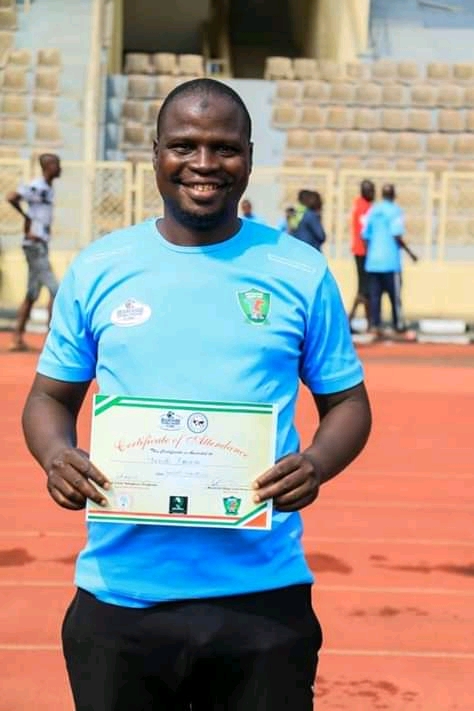 Coach Farooq Umar has heaped praise on the brain behind the ongoing Berackiah/Abigol Coaching Clinc as he believes it is the best way to go in developing grassroots coaches in the country.

Farooq Umar who is the head coach of Nationwide league one side Magate football club, was amongst hundreds of coaches who turned out for the first batch of the recently concluded clinic which took place in Ijebu Ode Ogun State.

Umar in a chat with Owosports correspondence via the telephone, said “This is the best way to go to help Nigerian coaches to grow.

He continued “When I saw coach Onigbede, Mathew Olorunleke, Marco Dvina and Roberto Bassi I was happy because I learnt a from them, it will surely help my coaching career technically.

“The historical and the exercise where very interesting especially when Baba himself Chiefs Onigbede was talking about the past I really learnt a lot.

“I think he shouldn’t be what will just come and go, it has to be continuous, probably every year maybe the NFF can look into it, like the one we just concluded, the next can be of a higher grade, if we continue like that, it will help us grow individually, as well as impacting our respective teams.

The gaffer however insisted that he’s eager and can’t wait for the Nationwide league one NLO 2020/2021 Seasons to kick start as he has set sight on promoting Magate Football club to the NNL.

“It has prepared me, I can’t wait for the NLO league to kick start because I really want to put into practice what I have learnt during the course of the exercise, I learnt a lot technically, tatical aspect of the game a lot of things too that I have been taught in the past by different instructor was also touched as a reminder, sometimes when you attend courses like this it reminds you what you have been through in the past and then broadens your knowledge and help you get more developed and that is going to help the team.

“Am a better coach than ever with this coaching clinic it going to help me as a coach it going help Magate as a team, Magate should not settle for less we are going to fight for promotion to the NNL God willing.