TRENDING
Home Basketball Engr Musa Kida Is The Authentic NBBF President, Group Threatens Legal Action Against Anyone Parading Himself As One 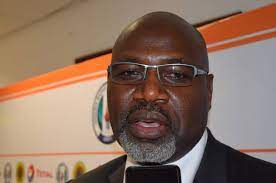 Engr Musa Kida Is The Authentic NBBF President, Group Threatens Legal Action Against Anyone Parading Himself As One

Friends of Nigeria Sports( FNS), a group of sport journalists, stakeholders and enthusiasts have warned Mark Igoche to henceforth stop parading himself as President of Nigeria Basketball Federation, thus deceiving lovers of basketball and the unsuspecting public.

This warning was contained in a statement signed by FNS’ National Coordinator, Preye Thompson. The strongly worded statement described Igoche’s recent actions and statements as acts of impersonation and attempts to deceive and hoodwink unsuspecting members of the public.

“We all know that Engr.Ahmadu Musa Kida is the duly elected president of NBBF and his election which was held in Benin City, was equally recognised and ratified by world basketball body, FIBA. Therefore, it is illegal and fraudulent for anybody else, other than Musa Kida, to lay claims to the NBBF presidency.

“Therefore, we want to admonish all peace loving and genuinely concerned stakeholders in the fortunes of Nigeria sports to disregard Igoche and his wanton penchant to destroy the good works already done by Kida’s led board in the last four years, due to self-aggrandisement and egoccentricism.

The statement continued, “Today, basketball is on the threshold of achieving greater feats under the newly elected NBBF board led by Musa Kida. As genuinely concerned stakeholders, we shall not sit down and fold our hands, while watching as some few disgruntled individuals scuttle the plans to revive and reposition the domestic game in Nigeria.

“It shameful and unreasonable for him and his co-travellers to try pitching the sports ministry against the NBBF, by insinuating that the Honourable Sports Minister, Sunday Dare, wants to impose Musa Kida on NBBF as the president. The sporting world are not oblivious of the happenstances that surrounded the reelection of Kida as NBBF President. The Benin election was done legally and constitutionally, and of course, witnessed by the FIBA.

“Let all those who are friends or associates of Mark Igoche warn him and his cohorts of the dire consequences of impersonation and their illegal activities. We shall not hesitate to institute legal actions against them,” FNS further warned.