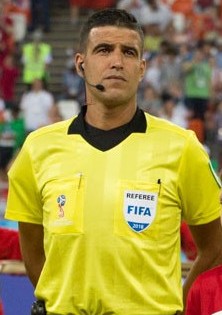 Nigeria football fans in their ignorance took to social media few minutes into the CAF Confederation Cup play-off tie between Enyimba of Aba and Rivers United, calling for the head of the contractors incharge of the Enyimba international stadium due to the heavy downpour that left the pitch waterlogged after just 10 minutes of play.

Most of these fans felt disappointed that a pitch that was laid just about three years ago, shouldn’t be in such a mess, knowing the huge resources invested into putting it in it’s present state.

However, the center referee for that match, Mehdi ABID CHAREF from Algeria has showered praises on the brains behind the Enyimba international stadium playing pitch, describing the turf as marvelous.

In what could be seen as the case of a prophet not being appreciated by his kinsmen, Charef said in over 15 years of officiating CAF matches on the continent, he has never seen a pitch as good as this. He said the fact that the water on the pitch dried off after just 10minutes was a miracle.

Speaking to top officials of Enyimba of Aba who will not want their names mentioned for obvious reasons, the referee said he had to call off the match when it became obvious that the pitch was waterlogged and the ball was no longer bouncing very well as required by the rules.

Few minutes after ordering the players into the dressing rooms, he blew the whistle calling them out again. He said he did so, because after doing a test alongside his two assistant referees, they were shocked and marveled at what they saw. This is miraculous he screamed as two top officials of Enyimba nodded their heads in agreement.

Enyimba of Aba won on the day by a lone goal and will visit Port Harcourt in a few days time for the return leg.