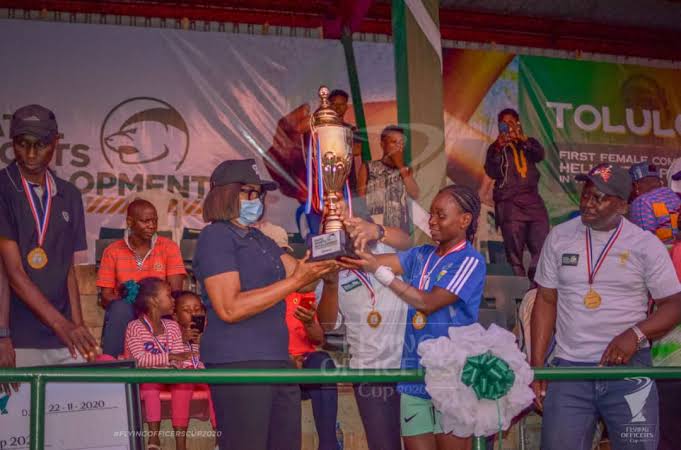 The President of Ratels Sports Foundation, Barrister Paul Edeh on Thursday inaugurated the organising committee for the third Edition of the Flying Officers Cup billed to hold in Abuja from the 22nd of September to 1st October 2021.

Performing the inauguration through a Zoom Meeting on Thursday evening, Ambassador Barrister Paul Edeh in his speech said the Committee was formed with a view of organising a befitting and colourful women football fiesta.

“As part of our commitment towards Women Football development in Nigeria, the governing Board of the Ratels Sports Development Foundation (RSDF) under my leadership is proud to inaugurate the planning committee for the 2021 Flying Officers Cup Pre-Season Championship.

“The Flying Officers Cup is a yearly event that has become an integral part of the RSDF and this year’s edition will be primarily dedicated to honouring our heroes past for peace and unity.

“A special Award Ceremony will be held at the end of the tournament to honour and reward deserving individuals who have made remarkable achievements in various spheres of life, including sports and have been a great source of inspiration to the girl-child for over a period of time.

“In addition, Digital Mirroring Concepts Limited will work as the official media consultants for the Tournament and shall coordinate the media and branding component of the Tournament. The consultants will work
with the Committee to achieve its mandate.

“The Competition will hold from the 22nd of September to the 1st Of October 2021 and will have 12 teams Participating, alongside two foreign clubs from neighboring country.

The UN SDG Peace Ambassador urged the committee to promptly swing into action towards the successful outcome of the Pre-Season Championship, tasking them to work closely with each other to ensure that all aspects of the tournament are covered.

The General Coordinator of the Committee, Dr. Victoria Nlemigbo and other members thanked the President of Ratels Sports Development Foundation, Barrister Paul Edeh for considering them worthy of the task ahead and promised to give their utmost best to ensure competition continues to be the best in the whole of Africa.

The Flying Officers Cup is the biggest Women Football Pre-Season Championship in Africa and for the first time in three years, Football Clubs from Ghana and Cameroon will be participating.