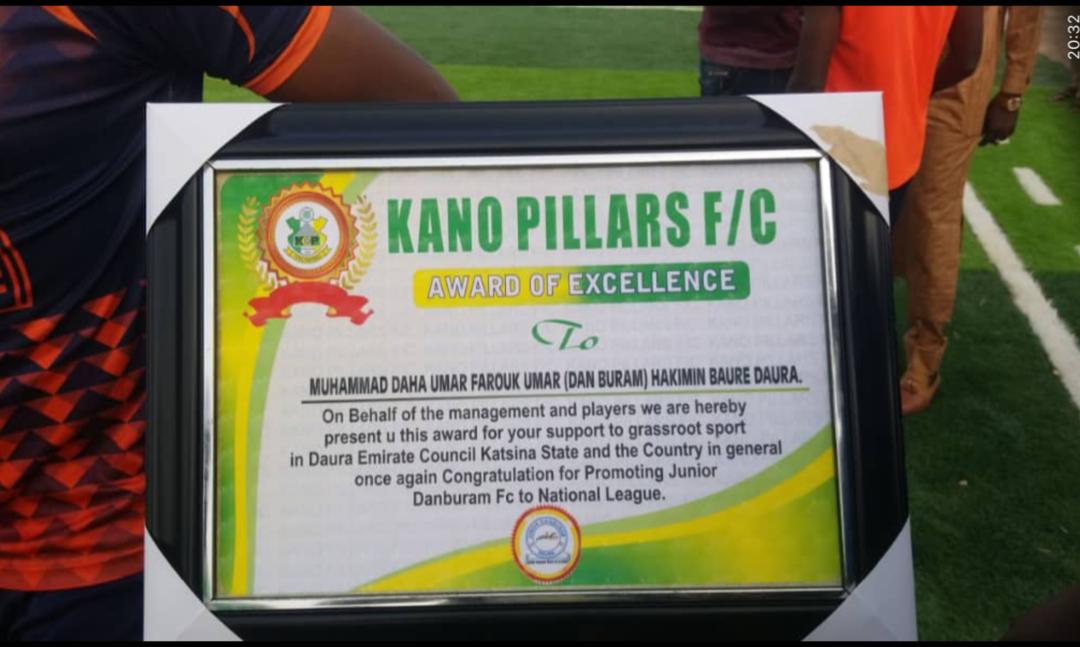 Chairman of Danburam Junior FC, Alhaji Muhammad Daha Umar Faruk (Danburam Daura) has been honoured by Kano Pillars for his contributions to sports.

The new football pitch of the Daura Township Stadium was opened officially, with the two sides entertaining thousand of fans. Pillars won 2-1.

Speaking on the impact of Danburam Daura, Kano Pillars Chairman Alhaji Surajo Yahaya Jambul said: “Your support and investment in the youths of Katsina is unprecedented. No wonder you are highly respected.”

“You’re blazing the trail [and] it’s not only restricted to education and human capacity development, the exploits of Danburam Junior FC speaks for itself.”

Responding to the kind gesture, Alhaji Muhammad Daha Umar Faruk said: “I am pleasantly surprised by this award and very glad that a great club like Kano Pillars found me worthy to be honoured.”

It will be recalled that amiable Chairman of Katsina State Football Association, Alhaji Aminu Balele Kurfi made a cash donation of N1.5m to Danburam Junior FC Daura for qualifying for the Nigerian National League.

Danburam topped the Kaduna Centre after defeating local rivals Katsina United Junior FC 2-1 in the finals of the Nationwide League One (NLO) playoff at the Ahmadu Bello University Sports Complex.

To reach the finals from Group B, Danburam Junior FC won all four matches conceding only one goal.

Kurfi donated the sum of N1m to support the club’s recruitment for the NNL.

He also said the sum of N500,000.00 was to be shared among the players and officials of the club.