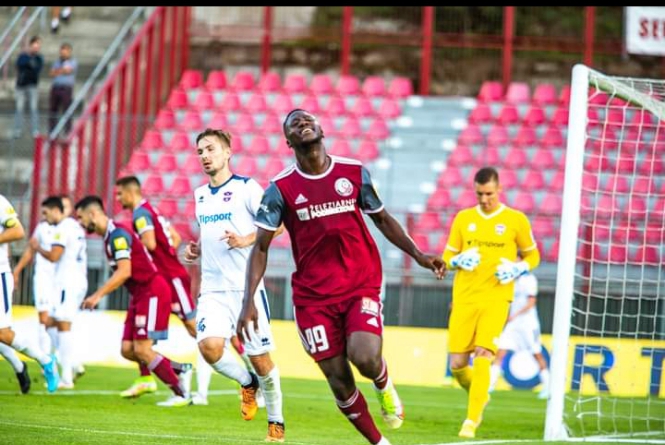 The Nigerian born skillful attacker David Moses Cobnan scored an astonishing four goals in a single game for the first time in his career on wednesday evening against FK Poprad In the slovakia cup game.

The 20 years old wonder kid, Moses who currently plies his trade with the Slovakian side FK Železiarne Podbrezová left his opponent lamenting as he vanquished their defences with his lethal strikes that found the back of their net four good times in the second half of the game .

The game which ended 0-0 in the first 45 minutes of play , took another dimension 12 minutes into the second half of the game, as the Former Obazz FC goal talisman Moses scored the first goal of the match at the 52nd minutes of the game and at the 64th minutes the Former Sk Sered player, showed up with another stunning strike that didn’t miss the right spot of the net of Poprad to make it 2-0 in favor of the away team Podbrezova.

As the match proceeded to the 79th minutes Moses registered his third goal as the scoreline became 3-0, many thought that was the end of the outpour of goals from Podbrezova, but it was a nonstop scoring day for Moses, as he decided to leave a resounding departure note in the hearts of their opponent as he scored the fourth goal that finally rendered the Poprad fans speechless at the end of 90 minutes of play.