TRENDING
Home Football NFF/Sports Ministry to take bold steps at fixing Nigeria football; both parties are united on the appointment of a foreign coach 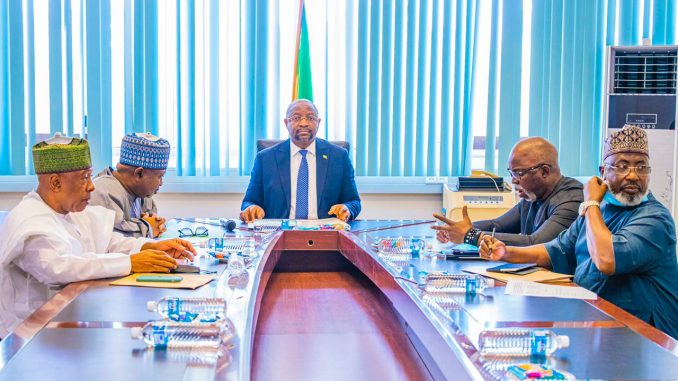 NFF/Sports Ministry to take bold steps at fixing Nigeria football; both parties are united on the appointment of a foreign coach

It was a close door meeting that started at exactly 4.10pm on Monday at the office of the minister of youth and sports development, Sunday Dare

The meeting was at the instance of the sports minister and present at that meeting was NFF president Amaju Melvin Pinnick and his General Secretary, Sanusi Mohammed.

The minister used the ocassion to review the events of Tuesday March 29 and all that happened.thereafter and asked the NFF to immediately set in motion modalities for the employment of a new coach for the Super Eagles.

For the records, at no point during this meeting did anyone mention the appointment of former Super Eagles Captain and coach  Sunday Oliseh. He was never considered and will not be considered according to our very impeccable source.

Yes, the meeting discussed the need to urgently appoint a coach to lead the Super Eagles ahead of the fast approaching Nations cup qualifiers and agreed that the way forward for Nigeria football is the employment of a foreign technical adviser with a Nigerian acting as Chief coach.

All the rumors about Sunday Oliseh taking charge as Chief coach are the handiwork of his media loyalist who are desperate to hand twist the NFF into appointing the former Juventus of Turin midfielder.

Secondly, the meeting condemned in strong terms, comments made by former interim coach of the Super Eagles  Augustine Eguaveon in a recent interview, where he claimed he advised the NFF and sports ministry to retain the services of former Super Eagles chief coach Gernot Rohr.

In that interview, Cerezo said that the timing of Germot Rohr’s sack was wrong and that he told the NFF before he was drafted in to lead the team, never to do away with the services of the Franco/German tactician.

Those are blatant fallacies and his comments are rather unfortunate.  Before Rohr was sacked, the players, coaches and members of the technical department were contacted. Many supported the idea and Eguaveon as technical director even said that Rohr was arrogant and hardly listens to him. As a matter of fact, why didn’t he Eguaveon, refuse the job when it was offered to him our source said?

In any case, the NFF and Sports Ministry have no regrets giving Nigeria coaches a chance. The performance of the Super Eagles in Nigeria’s group stage matches of the Nations Cup further motivated the the executive committee of the NFF to allow Eguaveon take charge of the World Cup Qualifier.

More than 80 percent of Nigeria football fans supported this move at that time even though the Super Eagles went out in the second round of the Africa Cup of Nations.

For the World Cup Qualifier against Ghana,  the team got the best treatment any Nigerian team ever got in the history of our football.

The players signed 35 percent instead of the usual 20 percent upfront match bonus payment, the NFF went the extra mile to offer them comfortable flights in from their various clubsides, superb accommodation and feeding both in Nigeria and Ghana, smooth and brand new aircraft to and from Ghana, a lush green turf in a stadium that was full to capacity, fair offficiating and to cap it all, God gave us a clement weather, perfect for good football. Now tell me where we went wrong my our source asked rhetorically.

The highpoint of Monday’s meeting is the rebranding of the Nigeria professional football league. Both parties agreed that there is urgent need to raise the standard of the Nigeria league, by improving the quality of play, quality of officiating and quality of our pitches.

There is also the need for clubs to work on their academies and develop young players that will take over from our aging stars. Both parties agreed that it is only when that is done, that the over reliance on Nigeria player born abroad will reduce.

There is need to raise the level of patriotism by getting only players who will want to die for the country to wear the green white green jersey of Nigeria play for this country henceforth.

The fast approaching Nations cup qualifiers and the CHAN tournament are key priorities and the NFF and Sports Ministry have resolved to tackle both events with uptimum seriousness. There is no need to create room for further distractions as Nigeria has decided to put behind them the failure of not going to the World Cup in Qatar.

Like Italy who failed to qualify for their second World Cup after losing to North Macedonia in the playoff, but have quickly gathered the pieces of their broken hearts to start playing friendly matches and preparing for the future, the Ministry and the Nigeria football federation have resolved to bounce back from the setback of Qatar to build a better tomorrow for Nigeria football.

*NB-This is all that transpired. Trust this source to feed you with the truth always*