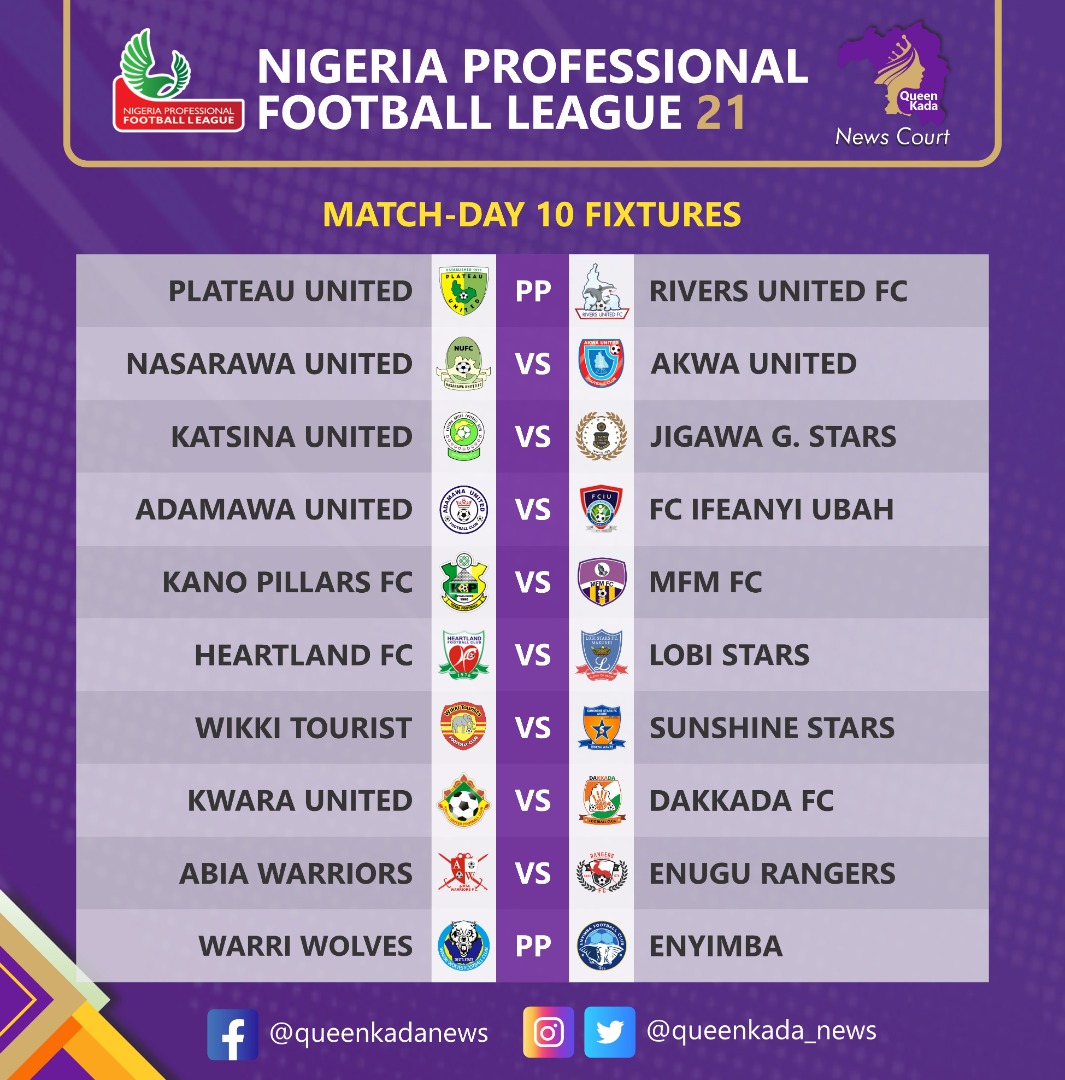 NPFL Matchday 10 and my predictions.

Katsina United have enjoyed some decent amount of results at home since the current campaign got under way, (3 wins, 1 draw) which isn’t a bad one for a little above average side.

Jigawa Stars have also not faired badly, one away win plus three home victories have kept them moving. But I think it’s Katsina United’s game to lose

A win for the away side would go a long way in boosting their quest to escape the drop. Having watched Adamawa United against Jigawa Stars in matchday 9 in Kaduna, the away team would have to up their game to pick all three points.

I would prefer to talk about the game proper than the current situation in the MFM camp.

Kano Pillars have scored in eight of their nine matches so far this season. The only match they have failed to score was in Uyo against Akwa United where it finished 1-0 in matchday 7. Kano Pillars have also not conceded a goal in four home games in their Kaduna adopted home.

Coach Emmanuel Soccoia’s magic wand? Still early to get to that conclusion yet.

MFM FC on their part, have not been too consistent with results since the start of the season. With just two home wins, two home draws, one home lose and two away draws, it will be very difficult for the Olukoya Boys to create any upset against the inform Kano Pillars in Kaduna.

Everything the Harmony Boys have touched football wise this season, has turned Gold. I can’t remember the last time they lost a match in the NPFL. Ooh! I remember. It was matchday 3 against Rivers United in Port Harcourt when they were hammered 3-0. Since then, Kwara United haven’t looked back and i doubt if they would against Dakkada FC.

Dakkada FC can’t be taken for a ride because they haven’t done badly in the nine week old league with some decent results both home and away.

The sun refused to shine and the stars went dim against Sunshine Stars in their matchday 9 encounter against Kwara United in Akure. Sunshine Stars will be hoping to get back to winning ways against their host, Wikki Tourists in Bauchi in this trickery fixture.

Wikki Tourists have only dropped two points at home this season and picking a point off Lobi Stars in Makurdi in matchday 9 will be a massive morale booster at the ATB Stadium, Bauchi. I don’t see Sunshine Stars picking anything from this.

The 1-2 away victory over MFM in Agege in matchday 9 might just be the turning point for the Fedelis Ilechukwu side to get going. Lobi Stars have drawn their last two home matches and would be gunning for at least a point in this encounter. With Lobi Stars not too impressive form of late, I’d give all maximum points to Heartland.

For me, this is NPFL star match of the week. Not just because it will be live on NPFLTV and NTA, but also about Imama and his former boss (Salisu) at the National team.

These two coaches are known for playing good brand of football and this particular game wouldn’t be anything less.

Abia Warriors have been struggling for form and results since the start of the season and coming up against a strong Rangers side with four points away from home already, perhaps, this match is coming too soon for Imama and his charges.

Rangers have also had their share of poor results like the 3-1 bashing from Sunshine Stars and the 0-0 at home to Lobi Stars.

Considering the short trip from Enugu to Okigwe, I think Rangers will further compound the woes of struggling Abia Warriors.