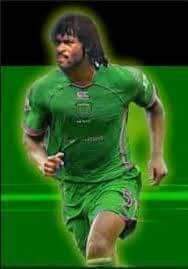 The Honourable Minister of Youth and Sports Development Sunday Dare has tasked Nigerian sports men and women to emulate the fallen patriot Samuel Okwaraji who slumped to his death, exactly thirty three years ago.

Okwaraji was in action for the senior men’s national soccer team, the Green Eagles, as they were called then, in a 1990 World Cup qualifying game against Angola inside the National Stadium, Surulere, Lagos when he slumped and died.

The Sports Minister says, “Okwaraji’s commitment to Nigeria and sacrifice anytime he was on the pitch in our green and white is a lesson on patriotism.

“We will always remember him for his zeal and service to Nigeria and sadly the way he died defending our national colours.

“This is a challenge to everyone of us, administrators and active sports men and women to always put this nation first in all we do,” the Minister said

As a way of appreciating Samuel Okwaraji, the Federal Ministry of Youth and Sports Development placed his mother, Lady Janet Okwaraji on a monthly support stipend until she passed on in 2020.