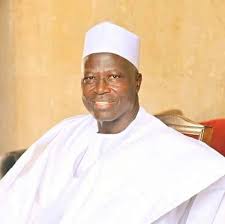 Senator Haruna Garba (Magayakin Gombe), is a trailblazer in the politics and sports annals of Gombe State.

He is widely known as the person that wrote the last memo that persuaded the late General Sani Abacha’s military regime to create Gombe State.

Magayakin Gombe has been an active player, coach, football administrator, proprietor, and NFF Board Member.

He was part of the key actors that precipitated the founding of Gombe United, a club he nurtured and sponsored into prominence. Even when he left Gombe for Abuja as the Senator of the Federal Republic, and later as Nigeria’s Ambassador to Kuwait, he continued to give moral and financial backing to Gombe United, and almost all football clubs in Gombe State.

He is known to be one of the most prominent philanthropists in Gombe State.

He sponsored uncountable number of young men and women to attain academic status.

He was instrumental in the livelihood of uncountable number of others in securing jobs and in the sustainability of businesses and other endeavours.

Magayakin Gombe, had solidly engraved his name in the sands of time.