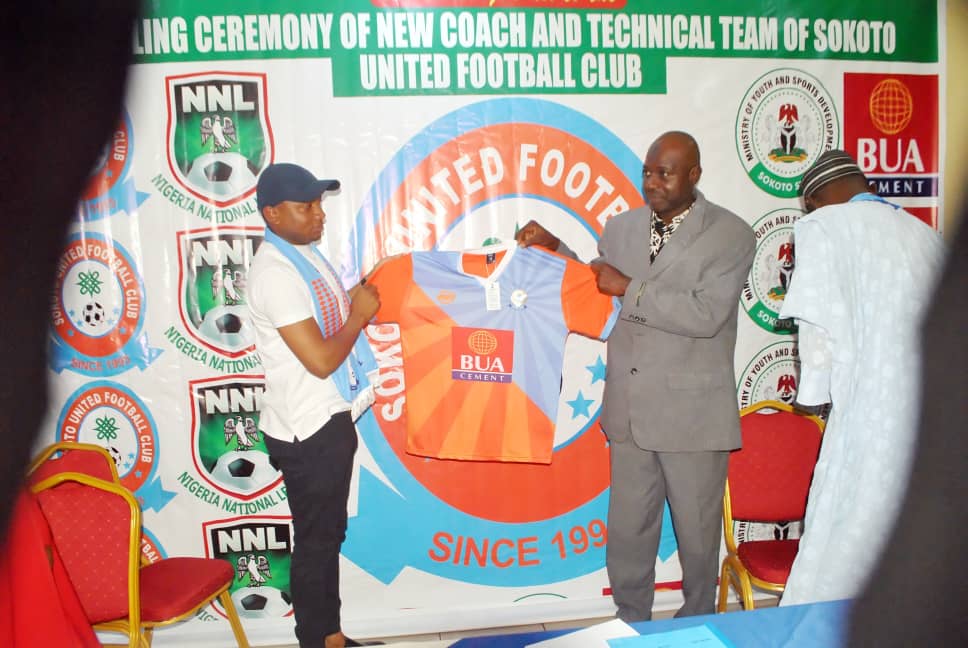 In a bid not to leave any stone unturned and pick one of the two NNL Northern Conferences NPFL promotion tickets next season, Sokoto United have unveiled former Gombe United Chief coach, Mohammed Mohammed as its new Technical Adviser ahead of the 2021/2022 NNL season on a 2 year contract.

The colorful unveiling ceremony was held this Saturday at Shukura Coral Hotel, Sokoto. The former Julius Berger, Sharks and Al Masri of Egypt player was immediately tasked to secure promotion ticket for the highly motivated Caliphate Boys next season.

The Honourable Commissional for Youth and Sports Development, Bashir Usman Gorau gave the mandate when presenting the new gaffer to the State FA, SWAN (Sokoto Chapter), Referees Council, Supporters Club and other key Stakeholders in the state.

“Today is an interesting day and event to unveil our Technical crew. The journey to the NPFL begins now. We have made the right choice of appointing you and your assistants after consulting with every key Stakeholders within and outside the state. That’s why we have invited everyone to witness this unveiling.

“Welcome our amiable Technical Adviser. Let me also challenge you and your team to take Sokoto United to the elite division next season as my Ministry and management of the club would give you the free hand to pick players of your choice without interference as all we crave is to play in the NPFL next season”.

Coach Mohammed Mohammed in his acceptance speech thanked the Ministry for giving him the opportunity to serve and promised to bring his wealth of experience to bear in other to actualize the set target.

“I want to thank the Almighty God for this wonderful opportunity and also the Hon. Commissioner, the Permanent Secretary and Director of Sports for making it possible to be part of this wonderful family. I believe so much in hard work and Sokoto United won’t be an exception.

“It’s not going to be easy, but with a solid structure in terms of players recruitment and with the already existing high level of players welfare here, we shall achieve our promotion target next season.

“I want us to be patient as we take our steps one after the other. I and my crew can assure you of good and result oriented football next season.

“The caliber of people I would be working with are highly experienced and together we shall place Sokoto United where it truly belongs which is the NPFL”.