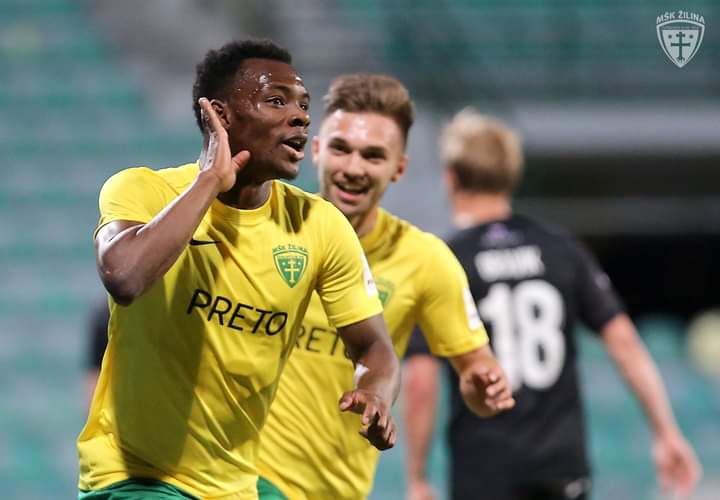 Posted By: Grace Johnon: May 30, 2021In: NewsNo Comments
Print Email

Nigerian Taofiq Jubril was the hero for his Slovakia club side MSK Zilina as they came from two goals down to beat FC Vion Zlate Moravce 3-2 in the mini-playoff final on Friday to grab a spot in the UEFA European Conference League qualifiers.

The first half produced an attractive goal scoring fest as it ended in a four goal thriller, Zlate Moravce’s top scorer Filip Balaj opened the scoring 13 minutes into the game with a header from a corner.

David Hrncar capitalized on a cross from Greek striker Alexandros Kyrizidis 11 minutes later and stretched the visitors’ lead to 2-0.

Zilina drew level just before the break after being awarded two penalties which Vahan Bichakhchyan took advantage of.

Zilina had several promising opportunities to complete the turnaround in the second half, but none of them ended in a goal, resulting in extra-time to decide the winner.

The home team continued to put Zlate Moravce under pressure before substitute Taofiq Jibril came on to score the winner in the 101st minute.

The Striker also clinched an award for the most goal scored for his former club Valadares in the 2019/2020 season in Portugal.

They will join FC DAC 1904 Dunajska Streda and FC Spartak Trnava, who secured direct spots in the new tournament by finishing second and third in the Slovakia 2020/21 Fortuna Liga season.