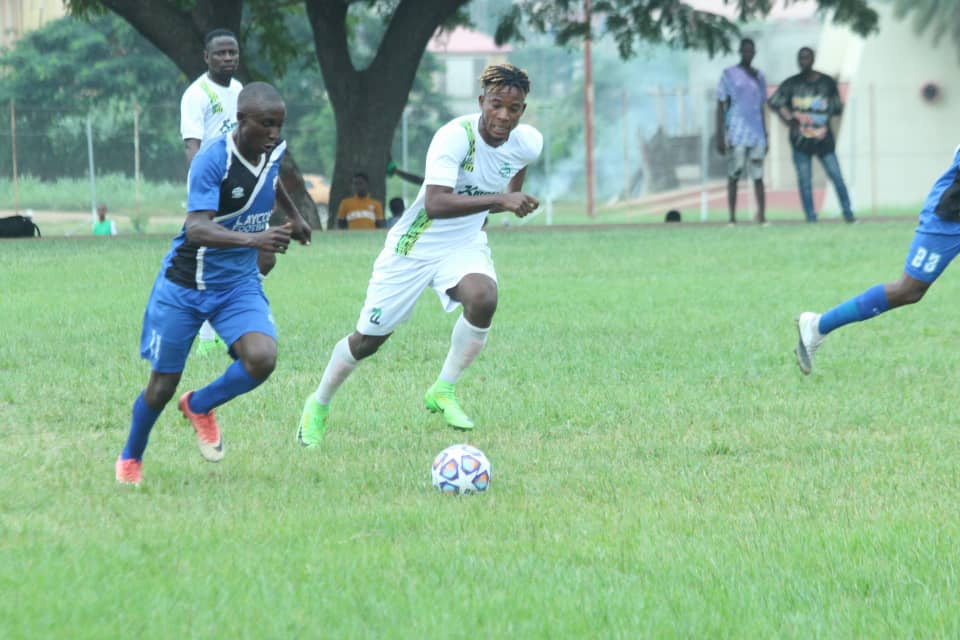 Amapro Football Championship Day 1 threw up a bucket load of goals and impressive performances, with eight games on Monday providing plenty of interesting pointers as to how the rest of the tournament might pan out.

Here’s a roundup of all the day’s action from the prestigious tournament.

An incredible day at the KFA Pitch saw Farinde Eyitayo score in the 69th minute to give Laycon FA a 4-4 draw against NPFL All Stars, when few would have thought it was possible.

Laycon had the breakthrough against the run of play. A cross at the right side found Gotie Taofeeq in the area and the forward nodded beyond the helpless Detan Ogundare for the first goal.

In the 10th minute, the lead was doubled. A brilliant pass from Muhammed Rahman found Emmanuel Daniel in the box. The winger was gracious to set up Yekini Rasheed who sidefooted to the net.

NPFL All Stars reduced the deficit through Ahmed Jimoh. The playmaker received the ball around 22 yards from goal, before taking a couple of touches forward and found the top corner with a brilliant effort.

The players thrilled fans at the KFA ground who enjoyed the moment.

Skillful midfielder Innocent Christian equalized for the experienced NPFL All Stars. He curled a Ronaldo-esque free kick to the top corner.

Kwara United central defender Deji Bamidele found space and had the simple task of netting the free kick with a wicked curler as NPFL All Stars went in front for the first time.

NPFL All Stars had their fourth as Wasiu Alalade produced a brilliant finish after breaking into a dangerous position. The rampaging Abubakar Idris sent a tailor made pass to Wasiu Jimoh who beat his marker and teed up Alalade.

Winger Al-Ameen Al-Ameen proceeded on series of stepovers and unleashed a shot which cannoned off the woodwork.

Gotie Taofeeq pounced on a loose ball just inside the NPFL All Stars box before poking home with a wonderful strike.

The Laycon boys found the equalizer late in the game. Farinde Eyitayo slammed the ball to the right hand side of Detan Ogundare’s post. The keeper had no answer to the fantastic strike.

Despite having a defence that contained Deji Bamidele and Alege Abdulkadir, it was a concern for NPFL All Stars that they shipped four goals here, with Laycon threatening to run riot.

It was an impressive win for Amapro Selected, who scored through Sunkanmi Sanni in a 1-0 win over HMK.

A game game of little real quality ended with Da Faria playing out a 1-1 draw with Success Tiyu FA.

Meanwhile, KFA and Abraysports gave fans value for their money. The match saw the Academy boys grabbing the curtain raiser through Issa Suleman.

Abraysports struck out of nothing to level matters. Muhammed Kamaldeen fired the ball to the far corner beyond the outstretched arms of Daniel Aiyenugba.