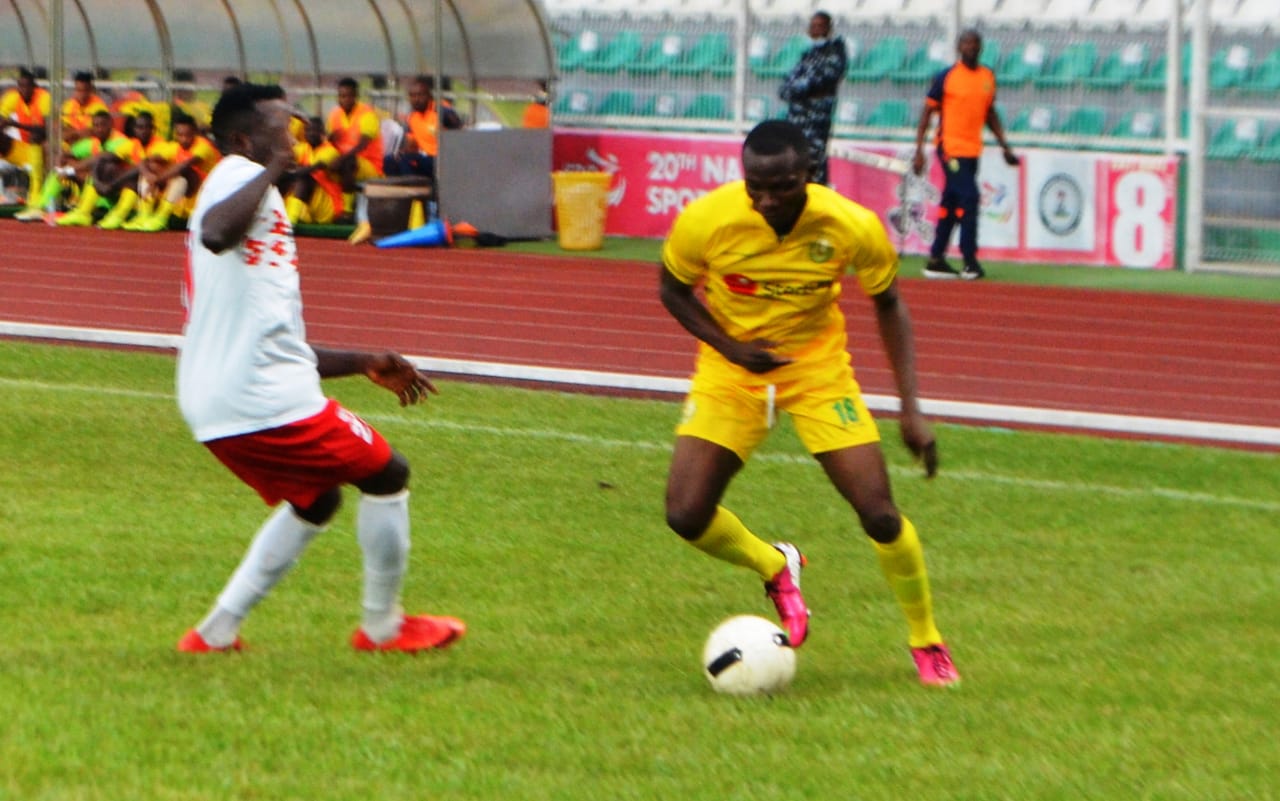 Bendel Insurance Football Club of Benin,weekend shrugged off the setback feelings from their midweek first defeat of the season at Gateway Utd to beat Ekiti United 2-1 and restored their confidence in Group B1.

The Week six match of the 2021/2022 NNL season played under the floodlights at the Samuel Ogbemudia stadium, Benin was full of exciting moments as the host launched aggressive attacking pertern against their visitors, with Ifeanyi Iheme, Meyiwa Oritseweyinmi and Sarki Ismael driving the process upfront, but BenjaminTanimu was the hero as he got a brace that sealed victory for the Insurers.

The Benin Arsenal’s central defender Taminu Benjamin distinguished himself,as he confidently converted two spot kicks to secure the maximum points for Insurance. His first goal came in the 25th minute after he was brought down in the 18 yard box following the pressure mounted on the visitors in their vital area.

With first half time drifting away,looking certain that the hosts will go into the break with 1-0 lead when the visitors were awarded a free kick at the edge of the box in the 47th minute which Promise George neatly placed into the net beyond the reach of the gloves of Kolawole Oladipo to tie the game 1-1 at half.

The equaliser was a temporary setback as the match winner, Insurance defence strongman Benjamin Tanimu,again converted another spot kick in the 68 minutes of play following a hand ball foul committed by Ekiti defeder inside the box. The brace was enough to restore Insurance confidence against the hard fighting Ekiti Utd.

In a post match interview, the Assistant Coach of Bendel Insurance Greg Ikhenoba said that the game was a standard one. He
noted that “penalties are part of the game, if you commit fouls in your 18 yard box ofcourse they are penalties and the referee cannot hexitate even if it happens seven times. There is nothing wrong in given up to six penalties in a game if the situation warrants.
We always tell our boys, you have to commit the defenders, so that you can get your fouls, it is part of the game.”

On his impression about some of the new players in the Insurance team, Coach Greg explained that the boys a gradually measuring up. “We are really impressed, this is their first game, not a bad one at all. We are still looking at them, we know they have a lot to give, so we still expect more from them as they get more opportunities.” He enthused.

Also speaking with Journalists after the game, the Team Manager of Ekiti Untied Mr Adu Adedeji Ebenezer said the better side won the game. He however expressed some reservations about the two penalties.

On his impression about Insurance, he rated the Benin Arsenal as a classy team. “The team is very good; very solid team. The management too is very good and we have picked a thing or two we will try to implement in our team when we get back home. Honestly,if all the clubs in Nigeria are managed the way we see things here in Bendel Insurance, football in Nigeria will be better. Honestly the management is very good, very solid”. He admitted.

Meanwhile,Bendel Insurance players continued in their season’s tradition of giving out their match day jerseys to their fans.

Bendel Insurance now have 11 points from 6 games to seat 2nd on the NNL Group B1 table, a point behind Gateway FC who lead the group with 12 points.

The Benin Arsenal have engagement with Osun Utd in the match day seven fixtures next weekend.